Why Millennials Are Partly To Blame For The Housing Shortage

The rush of young people to U.S. cities over the past few years is partly to blame for America’s worsening housing shortage.

In some of the country’s largest and most prosperous markets, such as New York, San Francisco, Boston and Los Angeles, housing construction has been stronger than normal in the urban core but weaker in the suburbs, where new housing can be built abundantly and more cheaply, according to an analysis set to be released Monday by BuildZoom, a website for construction contractors.

That is a problem because suburbs are typically the main drivers of housing construction.

For decades during the late-20th century, suburbs were the place to build, as urban cores suffered from high crime, poor schools and stagnant or shrinking populations.

But preferences have changed among young people, many of whom want to live closer to transit, restaurants and their workplaces. The share of young, educated people living in the urban core of Washington, D.C., for example, increased 8.6 percentage points between 2000 and 2014, according to Jed Kolko, chief economist at job-search site Indeed and senior fellow at the Terner Center for Housing Innovation at the University of California, Berkeley. Portland, Ore., and Chicago each saw increases of 6.4 percentage points.

“The expensive cities tend to be shifting toward a paradigm that says having a better location is better than having a fresher, greener, newer place,” said Issi Romem, chief economist at BuildZoom. 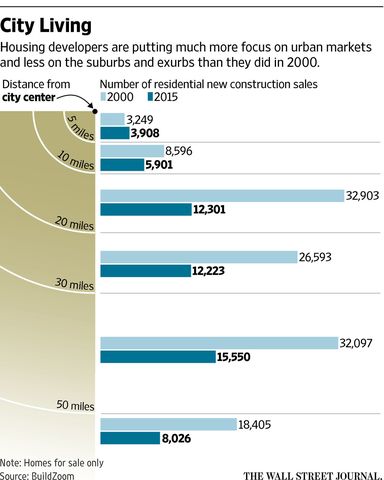 As builders have shifted focus toward trendier urban markets and away from cheaper suburbs, they have produced less housing overall than they otherwise might have. While starter-home construction has bounced back in recent months, it remains far from reversing this long-term trend.

At the same time, high land costs in central cities have pushed developers to focus on higher-end housing geared toward high earners instead of younger people just starting out.

The shift helps explain one of the most vexing aspects of the housing recovery: New homes are getting more expensive and yet there are fewer of them being built than in past cycles.

While new home sales within 5 miles of the centers of 10 of the country’s priciest and most densely populated metropolitan areas have surpassed levels from 2000, they remain more than 50% below where they were in 2000 when you go more than 10 miles out. The year 2000 is often used as a benchmark for a normal market, before the boom and bust of the mid-2000s.

To be sure, the study looks only at for-sale housing. More of what tends to be produced in city centers is for rent. What’s more, demand for starter homes has been bouncing back in recent months, as millennials get married, have children, and get fed up with rising rents.

The BuildZoom analysis shows that in metro areas where land is less expensive and there are fewer land-use restrictions, exurban starter homes are making a comeback.

In Austin, Texas, for example, 35.6% of new residential sales in 2015 was located more than 20 miles from the center, up from 12% in 2000. Indeed, exurban areas saw a threefold increase in new home sales between 2000 and 2015 with areas five to 20 miles from the urban core experiencing a drop.

The takeaway, Mr. Romem says, is that pricey cities need to loosen land-use restrictions in core areas where there is more demand. Allowing for more high-rise condo buildings would make it economical to produce starter homes in these areas as well.

“Do you care about preserving things the way they are, so that only wealthy people can continue buying in, or do you want to [encourage more density], so that housing is more affordable for everyone?” he asked.

Limited inventory, supply chain disruptions and concerns about inflation have led economists at Fannie Mae to lower their mortgage origination forecasts for the remainder of this year and into 2022

When you make an offer on a house, you might be wondering: How long does it take a home seller to respond to your offer?There’s nothing worse than sitting around waiting—especially when you’re

How much does it cost to build a house? The median price of constructing a single-family home is $296,652. That’s for an average-sized house of 2,594 square feet, which boils down to $115 per