What are Portland's best local attractions? As The Oregonian/OregonLive Life and Culture team compiled this list of our 2016 favorites, we aimed to offer a selection that speaks to the heart and history of Portland. These 12 sites offer a guide to exploring the parks, gardens, and curiosities that are sure to please visitors and locals alike.

If Pioneer Courthouse Square is Portland's living room, what does that make the Tom McCall Waterfront Park?

Is it our playground? Well, it is where we go to ride the rides during the Rose Festival, drink a beer at the Oregon Brewers Festival, rock out at the Waterfront Blues Festival – among many other festivals. And nearly every run or walk event imaginable passes through it. Not to mention the hundreds if not thousands of us who enjoy our occasional stroll or daily run along the Willamette River's west bank.

Is it our creative-entrepreneurial studio? Saturday Market, with its 250+ booths and 350+ artisans, seems to argue that.

Or maybe it's our heart and soul, which is why it's our top pick for Portland's best local attraction. Take a run or a stroll along the wide sidewalks and see the beauty and grandeur of Portland's bridges and skylines and glimpse the city's history as a thriving waterfront where ships loaded and unloaded before the docks moved north. Of course, you can still board a ship there, we're looking at you, Portland Spirit. (Sue Jepsen) 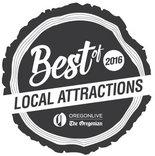 Mount Tabor: The hike up Mount Tabor, an old volcanic cinder cone in Southeast Portland, might be a perfect introduction to the city. Take the three-mile Blue Hike loop through the park to find great views of downtown Portland, three of the city's drinking water reservoirs and beautiful forested paths – not to mention peeks at Mt. Hood and Mt. St. Helens through the trees. On a sunny day, you won't be alone; Mount Tabor is a popular gathering place for local Portlanders and tourists alike. Southeast 60th Avenue and Salmon Street. (Jamie Hale)

Fort Vancouver: Located just across the Columbia River from Portland, Fort Vancouver is the area's premier destination to travel back in time to the region's pioneer heritage. Tour the recreated, historically accurate 1850s fort for a measly $5 and you can see re-enactors doing real work as blacksmiths, carpenters and more. With nearly 820,000 visitors in 2015, it's one of the most popular national park sites in the Pacific Northwest. 1501 E Evergreen Blvd, Vancouver;nps.gov/fova (JH)

Pittock Mansion and Forest Park: High on a cliff overlooking Portland sits the palatial residence of one of Oregon's most influential pioneers - and longtime publisher of The Oregonian - Henry Pittock. His historic mansion remains open for tours through time, and the estate's picnic-perfect gardens are an ideal spot to wind down from a hike in the adjacent wilderness of Forest Park. The 5,000-acre park's Wildwood Trail extends from either side of the mansion's parking lot. With more period pieces in the mansion and trail miles in the forest than you'd care to count, you could spend days exploring this perfect pairing for an indoor/outdoor day in Portland. 3229 NW Pittock Dr.; $7-$10; pittockmansion.org. (Dillon Pilorget)

International Rose Test Garden: Portland could not justify the nickname "Rose City" without its postcard-perfect International Rose Test Garden in Washington Park just west of downtown. The 4.5-acre spread has a tidy layout of flower beds and devoted volunteers, but nothing can stop 10,000 exuberant rose plants from spilling over borders, clinging to arches and sprouting to all heights. Buds are orchestrated to unfold in their full kaleidoscopic glory during Portland Rose Festival activities the first week of June. In warm months, there are concerts and weddings in the century-old public rose park, and you can arrange a tour of its different theme gardens. But despite the relentless activity, visitors typically walk slowly and quietly aim a camera at a rose that attracts them by its beauty or name (new hybrids being tested for color, fragrance and hardiness are nameless). Save the chatter for the Rose Garden Store, where the Queen of Flowers is imprinted on everything from chintz baseball caps to shot glasses. You can't pick a rose in the garden – you'll risk a $500 fine and scolding from longtime garden curator Harry Landers and otherwise cheerful, straw-hatted Royal Rosarians. 400 SW Kingston Ave. (Janet Eastman)

Portland Japanese Garden: It is not for convenience that we also recommend a visit to the Portland Japanese Garden, which is across Southwest Kingston Avenue from the International Rose Test Garden in Washington Park. You could fly around the U.S. and not find a more authentic Japanese-style garden than this one on top of a hill in Washington Park. Even while massive construction is taking place through Spring 2017 to create an ambitious cultural village outside the original entrance to the 53-year-old venue, the Portland Japanese Garden is serene and emotionally transportive. Nestled within the 9-acre grounds are five distinct landscaped areas including a strolling pond garden with its iconic moon bridge, a meditative tea house garden and a mesmerizing arena of raked sand and stone, a tier below the gallery pavilion. 611 SW Kingston Ave.; $6.75-$9.50; japanesegarden.com

Oregon Zoo: The ever improving Oregon Zoo is known for its elephants and holiday light displays, but a growing list of exhibits makes it a worthy stop for anyone seeking a critter-watching fix. See a swath of close-to-home creatures like cougars and black bears in the Great Northwest exhibit, or escape to Africa's plains and rainforests. Ride the train around the zoo and then to Washington Park and back again. In the summer, enjoy the zoo's perennially great lineup of outdoor concerts. 4001 SW Canyon Rd.; $8.50-$11.50; oregonzoo.org. (DP)

South Park Blocks: Designated in 1852, the "cathedral of trees with a simple floor of grass" that are Portland's South Park Blocks stretches through the city's Cultural District. Each of the 12 blocks is home to a work of art, two of the most recognizable are a bronze of Abraham Lincoln and a block away a bronze of Theodore Roosevelt sitting tall in the saddle. Along the park's edges rest the Portland Art Museum, the Arlene Schnitzer Concert Hall, and the Oregon Historical Society Museum. Steps away are the Keller Auditorium and the main branch of the Multnomah County Library. Every Saturday, Portland Farmers Market at Portland State University takes over the southern end of the park, and on Wednesdays, May to November, the same is true around the Shemanski Fountain. South Park Blocks along Southwest Park Avenue between Jackson and Salmon streets. (SJ)

Lan Su Chinese Garden: In the heart of Old Town Chinatown, with tall condo buildings looking down, Lan Su Chinese Garden is reverent and hushed. This one-block-square oasis, with its koi-filled Lake Zither, teahouse, and blooms for every season, combines art, architecture and nature in harmony. Unless it's Chinese New Year, when for two weeks, the garden roars with lion dances, glows with lanterns and bustles with traditional cultural activities. Lan Su Chinese Garden, 239 N.W. Everett St; $7-$9.50; lansugarden.org. (SJ)

Powells City of Books in the Pearl District: Sure, you could go to Powell's City of Books just to explore its nine color-coded rooms. But that would mean missing out on the rest of the Pearl District. Instead, why not consider a trip to Powell's to be Chapter One of your personal Pearl District adventure? If you love browsing the cookbooks in the Orange Room, step out Powell's back door afterward for numerous opportunities to eat and drink. If you're drawn to the Pearl Room and its books about the arts, the Pearl District is home to three dozen art galleries and a monthly First Thursday open house, as well as the Gerding Theater at the Armory, where Portland Center Stage has productions on two stages most of the year. Fans of the Purple Room's social sciences collection can test their hypotheses about human behavior at the Pearl's many shops and boutiques. Reading with the kids in the Rose Room? Work out all your wiggles afterward at Jamison Square, where little ones can splash in a fountain all summer, or The Fields, which has a playground. Or create the perfect ending to your day by stretching out on the grass with – what else? – your new book from Powell's. 1005 W. Burnside St., powells.com (Amy Wang)

Ground Kontrol: A leader in the modern arcade movement, Portland's own Ground Kontrol is both a mecca for video game nostalgia and a vibrant attraction in Old Town's nightlife scene. The arcade boasts more than 60 classic arcade games – from "Donkey Kong" to "Turtles in Time" – 27 pinball machines and a full-service bar after 5 p.m. It's gained fame for its "sleek, retro-futuristic" interior design, but it will soon scrap it all for a newer, sleeker design in a much bigger space next door. 511 NW Couch St., noon-2:30 a.m. daily;groundkontrol.com/arcade (JH)

Oregon City Municipal Elevator: An oft-overlooked landmark of the region's rich history, the hillside elevator in downtown Oregon City offers bird's-eye views of Willamette Falls, the newly renovated Oregon City arch bridge and the agreed-upon end of the Oregon Trail. It lands on almost any list of interesting elevators for its resemblance to a UFO and its status as the only municipal elevator in the U.S. For an easy trip out of Portland, head to the elevator for a short ride up and a quick hello to the operator. 6 Railroad Ave., Oregon City; free to ride; orcity.org. (DP)