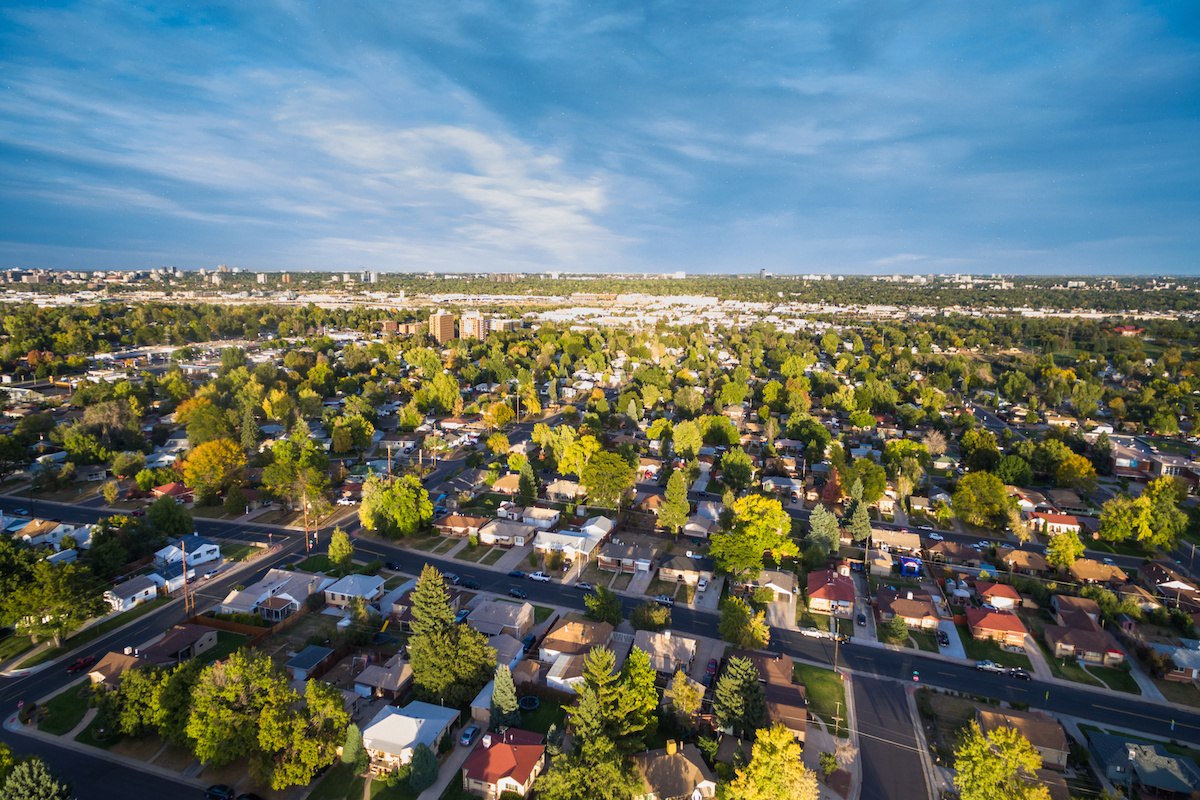 The health and economic crisis has made 2020 a horrific year for many Americans. Added to all that misery we had terrible fires in the West and hurricanes in the East.  From my perspective, that ball in Times Square can’t drop fast enough hailing the end of this year.

One might think that with all the bad juju circulating the planet lately, people would be extra careful not to bring more misery upon themselves.  One might think that. But then we have our band of Housing Bubble Boys who, shamelessly, never miss a chance to call it wrong in epic fashion.

Some of their biggest hits (or should I say misses) in the last 8 years have been the never-realized silver tsunami crash, the ever popular investor supply crash, the Airbnb supply crash, and this year, COVID-19 was for sure going to send prices crashing 30%-50%. Despite what they promised, we sit here today with the United States housing market outperforming all other economic sectors in the world during the pandemic.

Hey, at least they are consistent in their catastrophic failure to predict what will actually happen.

Also in predictable fashion, after time proves one of the crash theses wrong, our band of Bubble Boys have a proclivity for moving the goal post. The COVID Housing Crash of 2020 that they promised has now been repurposed as the Forbearance Crash of 2021. According to this new and improved crash thesis, when the forbearance plans time out in 2021, home prices will crash 30%, 40% or 50%. This will make their daily trolling of America for the last 8 years worth it.

These Forbearance Crash Bros, as I started calling them a month ago, have some explaining to do. One of the critical problems with their thesis is that jobs are coming back and this means more folks are likely to voluntarily quit their forbearance plan. There will be lag time in this data but an improved national employment picture is a leading indicator for some of these forbearance loans to be modified and off that data line.

In order for the housing market to crash due to too many loans going into default when forbearance programs end, the number of loans in these programs needs to grow. A 30%-50% crash in home prices next year would require that loans in forbearance go above 10 million. But data released from BlackKnight just last week shows the number of these loans fell 18% and is now standing at 2.97 million. The number isn’t growing; it’s slowly shrinking.

We have a precedent for how housing crashes happen. We just need to look back to 2008 when we had over 10 million delinquent loans. Due to the loosey-goosey lending standards of the time, many of these delinquent loan holders had little to negative equity. Even if two people in a household were working and their loan recast, it still would have been hard to make the payment. Added to this, the cash-out boom from 2003-2006 meant that many households had little to no nested equity when the crisis hit. Needless to say, this was a very precarious and unhealthy market.

None of these factors exist in the market now. Today, while we are still early in the forbearance recovery phase, the number of potentially at-risk loans is under 3 million. Also, whoever the president is next year, you have a good shot that forbearance might be extended under a new format.

Today’s homeowners had a healthy financial profile when they originally purchased their homes and began their loans with some equity. After eight years of price gains, that equity position has just gotten better.

And with home prices continuing to rise in 2020, this nested equity is still  rising.  Mortgage demand, too, is at an 11-year high. This is a seller’s market, my friends, not a market on the verge of a crash. Monthly supply data started to get bigger in 2006 two years before the recession hit in America. Housing data started to soften in 2005 after an overheated market.

But instead, demand picked up and the monthly supply of homes broke under six months. That year, existing homes sales broke over 4.5 million. To spell it out – even if some forbearance homes hit the market we have the demand to keep prices from crashes. This right here is the biggest failure of so-called housing bubble boys and their band of forbearance crash bros. This sounds like a broadway play.

Why am I so sure that demand will be sufficient to absorb any excess inventory created by the end of forbearance programs to prevent an epic crash in prices in 2021?

First, after 1996 it’s very rare to have any sales print under 4 million. Currently we are pushing hard to get total existing home sales positive from 2019 levels of 5.3 million. 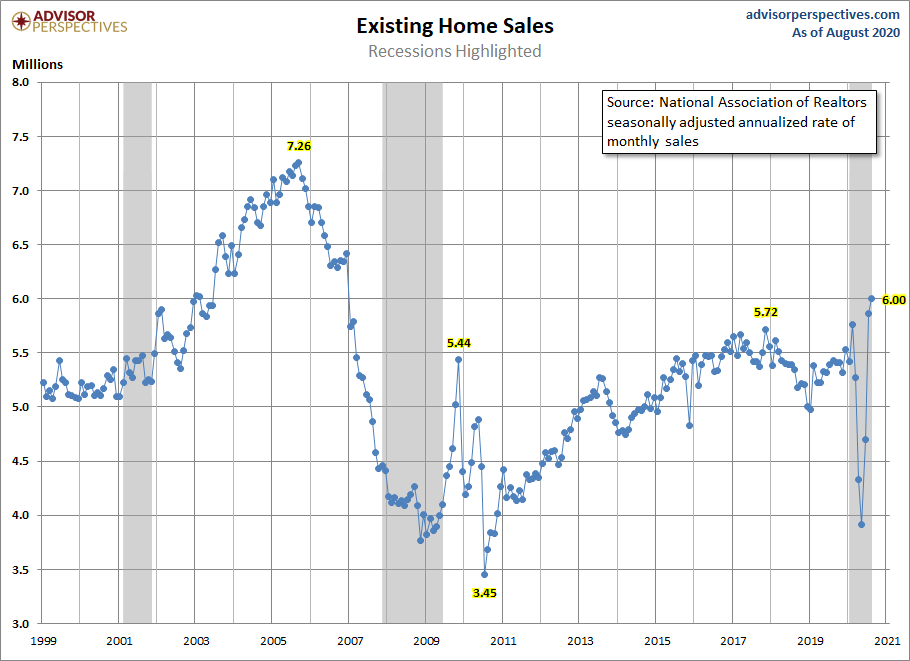 Second, and more importantly, right now the U.S has the best demographics for home purchasing ever.

And third — mortgage rates are very low. I would be mindful of housing when the 10-year yield breaks over 1.94%, if that even happens next year.

So we have the demand we need if the end of forbearance causes a surge of homes to hit the market. If that happens. I am not a big fan of using the term foreclosure crisis leading to 30%-50% price crashes next year either. Here is why I don’t believe that will happen: We do not have an overheated multi-year credit bubble among mortgage holders like we had from 2002-2005.

The chart below (with credit and kudos to Len Kiefer from Freddie Mac), shows that, when adjusting to inflation, mortgage debt isn’t even positive compared to the previous expansion. Also, we have a much higher nested equity position. Do remember that 20%-30% of all homes bought in the previous expansion were bought with cash. 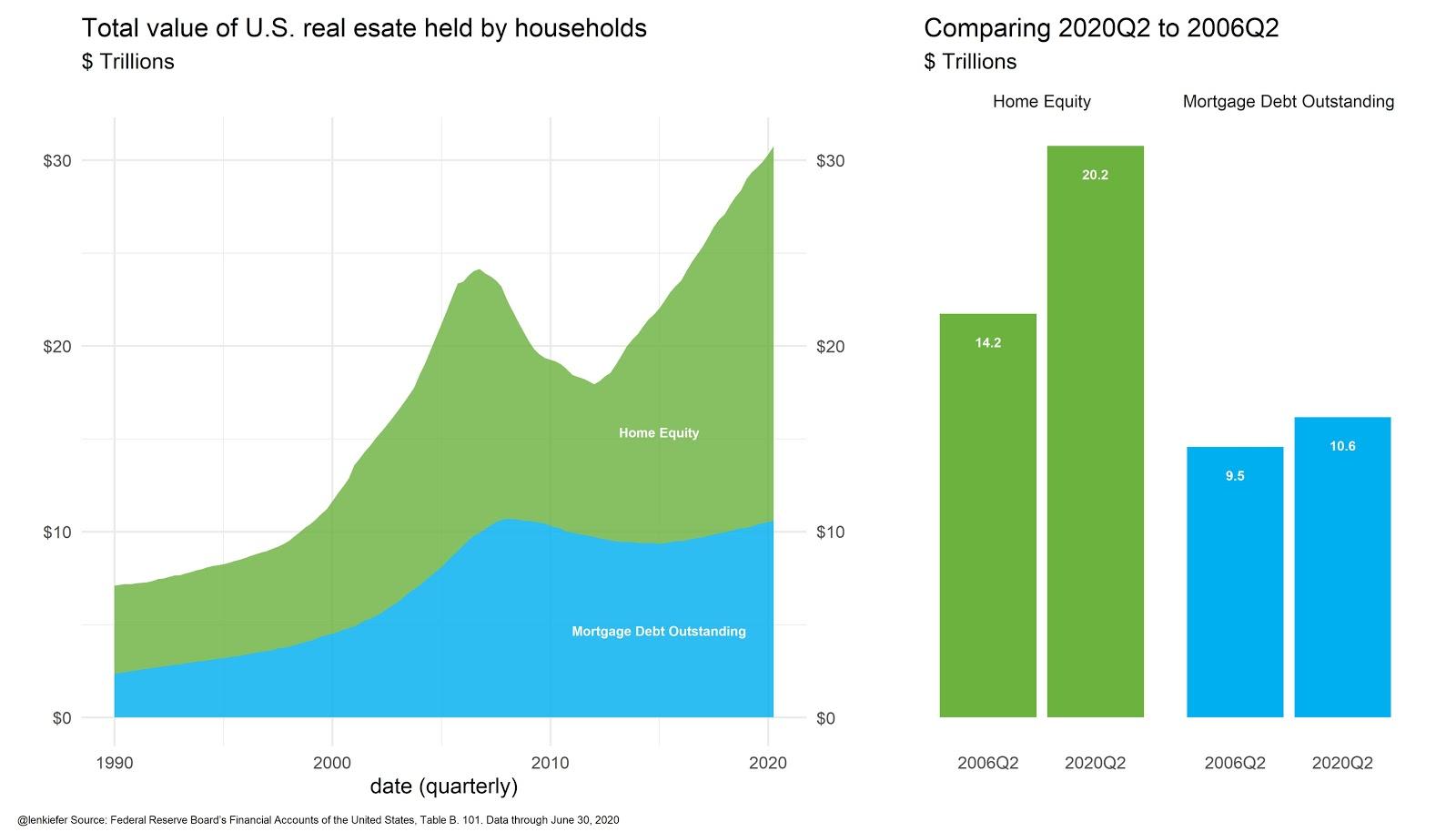 When one considers all these factors, does it really seem likely that we will have a 30%-50% reduction in home prices due to a massive increase in inventory from forbearance loans due to a lack of demand? Demographics, mortgage rates, solid nested equity, jobs coming back — all of these make it seem that it’s very unlikely for the bubble crash to happen next year.

In December I will revisit the topic of forbearance with more specifics. However, as you can see already, the forbearance crash bros might have spoken too soon in 2020.

Until then, stay positive, healthy and safe – and try not to create problems for yourselves by buying into boy-band folklore and fairytales.

If you imagined 2020 was the year you would finally list your house for sale, you may have hit the brakes on those plans when the coronavirus pandemic arrived.But now, we’re more than six months

As much as we all wish we could go back to a time when social distancing was a foreign concept and masks were just something you wore with a Halloween costume, it’s clear by now that COVID-19’

The health and economic crisis has made 2020 a horrific year for many Americans. Added to all that misery we had terrible fires in the West and hurricanes in the East.  From my perspective,