5 Pieces Of Investing Wisdom For Summer 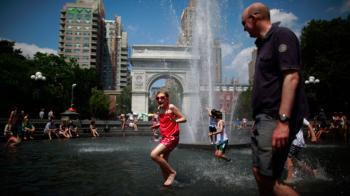 Summertime means time spent lounging at the pool or beach, hosting barbecues and planning well-deserved vacations. Investing is probably the last thing on our minds—but it should be.

Money management and budgeting should be a key player in your summer plans. After all, with Wall Street’s recent performance, you might be missing out on some great investing opportunities while sitting at the beach or ballpark.
In honor of everything summer, we found the best financial advice you should take this season to create a financially-healthy and stable future:

Tip No. 1: Summer Doesn’t Last Forever
Just like the warm weather won’t hang around all year, you won’t be able to stay in the workforce forever.
Don’t wait to start planning for retirement. Thanks to the effect of compounding, every dollar that you reinvest into your portfolio grows at an exponential rate year after year, so the earlier you start the better.
Make a concerted effort to start putting aside some savings every month. Even if it’s only a small amount, the dollars will start adding up.
Tip No. 2: Don’t Get Caught Up in Summer Festivities
When it comes to economics and finance, “rational behavior” is limited to textbook theories. In the real world, people systematically make investing mistakes when the heart overtakes the brain.
One of the most well-known emotional traps is called “asymmetric loss aversion” which is basically a fancy way of saying that the negative emotion associated with financial loss is much stronger than the positive association with financial gain.
Asymmetric loss aversion is helpful in many walks of life. If you smell smoke in a building, your first instinct is to flee - and that can be lifesaving. When it comes to investing, though, loss aversion tends to kick in at the worst time.
The fall of 2008 was a stomach-churning time for anyone with an equities portfolio. But if you gave into that overpowering fear and sold your holdings from September 2008 - March 2009, you effectively turned paper losses into actual losses. Stocks eventually recovered, and by spring 2013, the Dow and the S&P 500 had reached new all-time highs. Investing for the long-term requires the discipline to control your fear and avoid those emotional traps.
Tip No. 3: Don’t Stare at the Sun

“If only I’d bought Google right after the IPO...or Apple before it brought out the iPod...or Microsoft before it dominated the software market.”

How many times have you imagined the hypothetical riches that would have come from such decisions? That’s like starring at the sun.
Here’s the reality: The odds of picking that one generational winner out of a sea of more than 5,000 publicly-traded stocks (in the U.S. alone) are not much better than the odds of winning in Vegas. Even professional, seasoned investment professionals lose more than they win, on average.
A better alternative to staring at the sun and thinking of what might have been is to diversify across a range of asset classes, such as domestic stock funds, international funds, bonds, and more. The mix should reflect your long-term goals and your risk tolerance.
Tip No. 4: Too Much of a Good Thing is…Expensive

It’s important to budget and know exactly where your money is going.
All of it.
Whether it’s happy hour after work, a pair of news shoes or a 1.5% fund management fee on your investments, it’s important to track your cash inflow and outflow and identify any spending areas that should be tightened up.
Tip No. 5: Be a Team Player
Even if you’re the kind of person who hates asking for directions when lost, remember investing should not be a solo activity.
There is a wealth of information at your fingertips that can help guide you through the intricacies of budgeting and long-term investing.
It’s important to learn how to allocate your portfolio around your goals, how to optimize for taxes and other strategies that can make a meaningful difference to your financial future.
Remember: the future will arrive sooner than you think.
Source

Remodeling Expected To Remain Hot Even As The Pandemic Eases

A new report from Redfin shows that homes listed midweek sell for an average of $1,700 more than homes listed on the weekend, based on homes sold above their list price from July 2020 through

Millions Will Enter Housing Market In 2021

In what will be known to future generations as the Great Reshuffling, a recent Zillow survey showed that more than 1 in 10 Americans reported moving in the past 12 months, either by choice or by

How Often Can You Refinance A Home Loan

Homeowners with a mortgage often hear about the benefits of refinancing—to snag a lower interest rate, reduce their monthly loan payments, and tap into their home equity. The list of advantages is