Biketown Bikeshare Launches Today And The Five Things To Know

Portland streets have taken on an orange tint in recent weeks in preparation for the Tuesday launch of the central city's new bike-share system.

A hundred Biketown racks have popped up across 8 square miles. Crews planned to distribute most of the system's 1,000 bikes overnight Monday into Tuesday.

The system goes online at 11:30 a.m. Tuesday after a celebration near the Tilikum Crossing in the South Waterfront. 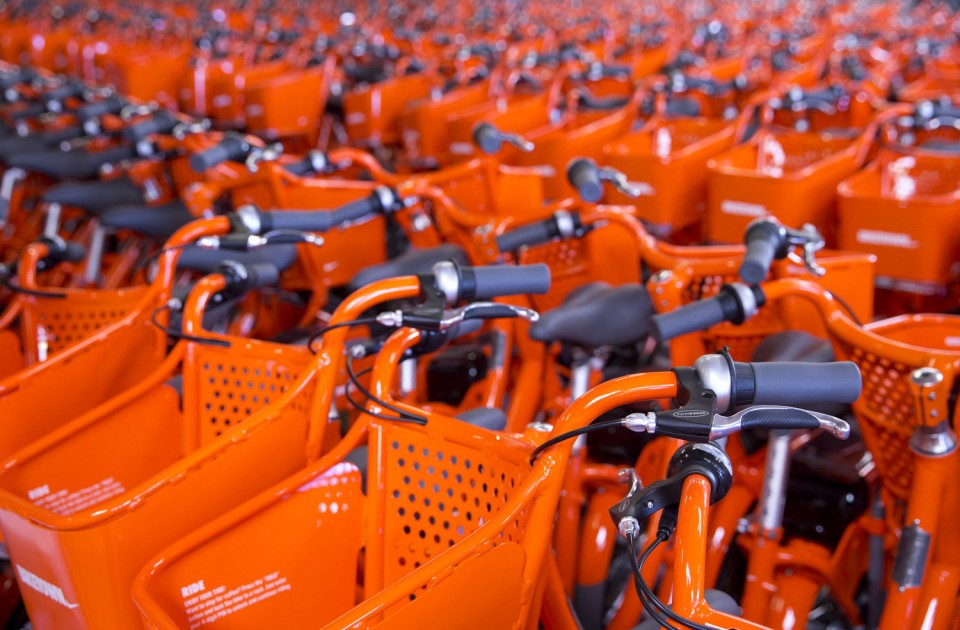 How to try it out: Biketown has to this point focused on recruiting users willing to shell out for one-year memberships, but there are options for more casual riders looking to test the waters.

The first step will be to create an account. The easiest way will be to go to biketownpdx.com or download the Biketown smartphone app for iPhone or Android.

You'll be assigned a six-digit account number and asked to create a four-digit PIN. You'll need to punch in both numbers to rent a bike. (Yes, that's 10 numbers to memorize.)

Another option is to visit one of 20 Biketown stations equipped with a computerized kiosk. For $2, they can also dispense a reusable member card which you can tap instead of entering the member number, though you'll still need to enter the PIN.

You can reserve a bike online or on the app, or you can simply walk up to a bike that's not in use and rent it with your member ID and PIN.

What the bikes are like: Bike-share bikes are a different ride from most personal bikes.

At about 45 pounds, the eight-speed bikes are heavy, and they're not particularly fast. They're also built so the rider sits upright. Both take some getting used to, but they help make the bikes a little safer.

The bikes are also equipped with front and back lights, which turn on automatically. They have a bell, activated by turning the left handlebar grip.

They don't come with helmets, however, so users who prefer to use one will have to bring their own.

The bikes use a shaft drive rather than a chain, which protects pant legs from grease stains and catching. Check out our road test from earlier this year.

Program organizers had hoped to sign four digits of members by launch day, and they offered incentives to do so. Each of the first 1,000 members were promised a "Founding Member" identification card and T-shirt, and the first 500 got one month of their membership for free, courtesy of a sponsorship from the Metro regional government.

Annual memberships are key to keeping the system self-sustaining. The $12-a-month annual plan — priced at equal cost to a day pass and less than five single-rides — are meant to be alluring to people who use the system with any frequency, but they'll pay for the system year-round, even in the cold and rainy months.

And annual members typically account for well over half the ridership in other markets with similar programs.

"In general, member revenue and sponsor revenue are the two legs that are going to be covering the operational costs," Rivera said.

Among non-member riders in Washington, D.C., two-thirds were visiting from out of town. While Portland might not have the tourist draw of the nation's capital, some visitors to "America's Bicycle Capital" might have a bike ride on their to-do list right after (or as part of) a stop at VooDoo Doughnut.

To help acclimatize unfamiliar riders, the city is installing maps of bicycle-friendly routes at Biketown kiosks. The Biketown app also includes maps of bike routes and trip-planning tools that direct tourists to those routes.

Stations near streetcar tracks will also warn riders to stay clear, and to cross them at a 90-degree angle to avoid getting caught in the ruts.

Some people are upset that Biketown displaced parking for cars — or other bikes. Residents of some neighborhoods started posting angry notes near new Biketown racks that displaced on-street auto parking, while frequent cyclists found some bike corrals had been replaced by off-limits Biketown racks.

In many areas, the city is looking for alternatives to displacing parking. For example, it's decommissioned reserved spaces that are no longer used. In Northwest Portland, the city says the new spaces unlocked through those efforts means there will be no net loss of on-street parking.

Rivera said numbers weren't available Monday for other parts of the city.

As for the bike parking, Rivera said some corrals were removed, but that they might be replaced in the coming months. In the end, he said, any net loss of bike parking will likely be less than 1 percent, or the equivalent of 30 standard "staple" racks.