Can Portland Build Its Way Out Of A Housing Crunch 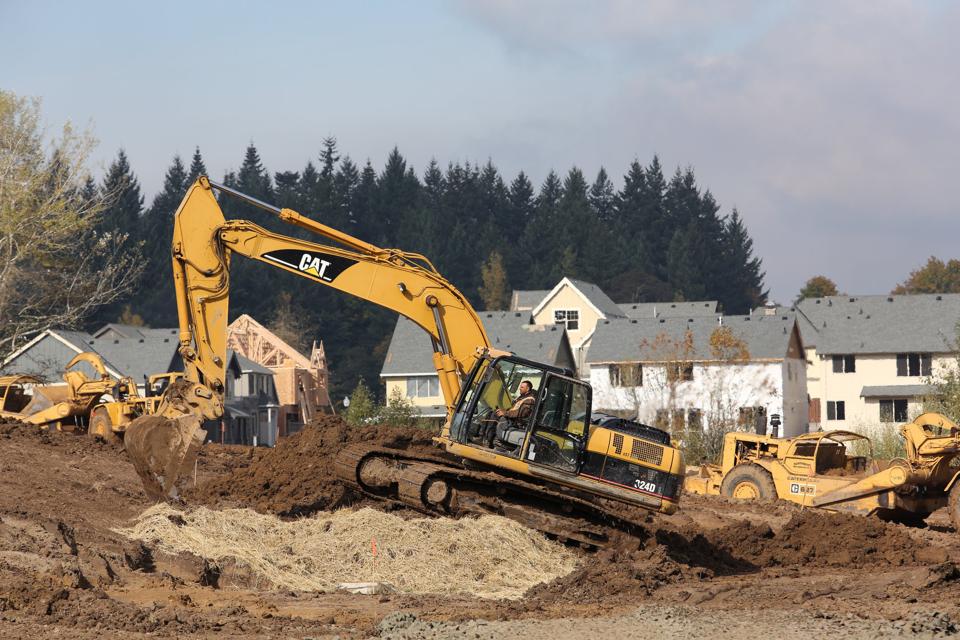 It's a common complaint about Portland's painful housing crunch: Why are builders catering mostly to high-end buyers?

New homes, on average, command higher prices than 80 percent of the homes on the market, said Skylar Olsen, an economist with the real estate website Zillow. "Construction firms ... tend to go for the luxury," she said. "That's how they're going to get a better bang for their buck."

So where does that leave those who are scouring the ads for their first home in a region where housing stocks have been drained by years of population growth and underbuilding?

New homes, already sold for a premium, don't appreciate as quickly as existing homes, and over time the rest of the market catches up. Economists call the process "filtering," and it explains how a home can change price tiers.

It usually takes about 30 years for a home to complete the filtering cycle and revert to the mean home value, said Josh Lehner, an Oregon state economist.

Today's housing crunch has policymakers and some builders trying to jumpstart the filtering process. But building homes for middle-income earners is a tall order, builders say, as land, labor and material costs have risen dramatically in recent years. Development fees have climbed, too, as cash-strapped cities look to raise revenue.

"Those fees hit everybody hard, but they hit the guy trying to build the starter house the hardest," said Justin Wood of Fish Construction NW.

The company shared its costs for two skinny homes it recently sold for roughly $290,000 apiece in Southeast Portland.

It spent nearly $85,000 acquiring the land for each. It paid $36,000 for permits and development fees on one home. For the other, it found a buyer who qualified for an abatement program, lowering those costs to $15,000.

"Some would look at these reports and think $19,000 or $35,000 is a lot of money, but in the context of a business they really aren't," Wood said.  "We have always prided ourselves on trying to build homes for that first-time homebuyer or that working class segment of the market.

"That being said, it is a gamble for us which is becoming harder and harder to do."

Garner Moody, a Portland developer, built a 12-unit condominium building in North Portland. Originally, the tiny units -- between 387 and 556 square feet -- were set aside for a city program aimed at residents displaced by gentrification, and the developers received a $460,000 subsidy.

But qualifying buyers weren't interested. Moody withdrew, agreed to pay back the subsidy and put the homes on the open market.

All 12 units sold in nine days.

It was among the first condo projects in the recent construction boom with price points below $300,000, and the response suggests strong demand, Moody said.

The city of Portland is looking to encourage other types of development, including townhouses, duplexes, triplexes and accessory dwelling units. A code rewrite that began in concept last year would make it easier to build such dwellings.

"Our single-family zoning is catching up with us. The cost in land to build one front door has grown a lot," said Eli Spevak, an architect and developer who served on the committee that helped draft the revised code. "That means it's going to be difficult to build a house for a first-time homebuyer."

Though builders say they're eager to respond to a hot housing market, the construction rebound so far has been less than robust. That's in part because of a lack of buildable land, said Dave Nielsen, the chief executive of the Home Builders Association of Metro Portland.

Nielsen said his group's members are frustrated when they encounter bureaucratic barriers to building. It can take time for cities to plan and build the infrastructure to support new homes, Nielsen said, which delays housing that could help ease the crunch. In other cases, he said, zoning regulations can be unclear or inconsistent.

"If you bring land into the urban growth boundary and you can't build on it, is that a functional land supply?" he said.

Lehner, the state economist, said a main driver of slow housing construction is not a local issue, but a national one: tight credit. Lenders have only recently started increasing the flow of capital to developers, which should spark more building.

"The key to this whole filtering process and getting affordable over time is ensuring that the supply continues to increase," Lehner said. "If it doesn't, you get affordability challenges where tiny little bungalows are selling for $3.2 million."

That's become commonplace in Palo Alto in the heart of California's Silicon Valley.