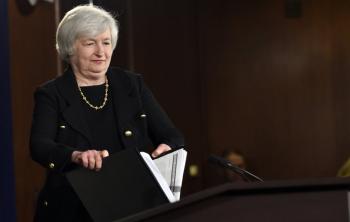 WASHINGTON — The Federal Reserve is in no hurry to raise interest rates.The economic recovery has stayed on course in recent months, and the Fed’s policy-making committee said on Wednesday that it saw no reason to change its own plans, rejecting calls for a faster retreat from its long-running stimulus campaign.

“There are still too many people who want jobs but cannot find them, too many who are working part time but would prefer full-time work, and too many who are not searching for a job but would be if the labor market were stronger,” the central bank’s chairwoman, Janet L. Yellen, said at a news conference.

As expected, the Fed said it would move to end its most recent bond-buying campaign after adding a final $15 billion in October to its holdings of Treasury and mortgage-backed securities, according to a statement published after a two-day meeting of its Federal Open Market Committee.

6 Projects To Banish Boredom From Your Yard

How To Renovate Tight Living Quarters Without Cutting Corners

If you live in a small space, you’re used to having to come up with clever solutions to maximize your home’s potential. So whether you’re looking to renovate a studio apartment or small house,

Are You Making One Of These 7 Landscaping Mistakes

You can just picture it: a pretty cottage garden overflowing your front yard, with tons of heavy, scented blooms.Well, at least you can picture it with your eyes closed. With your eyes open all you

Fannie And Freddie Set Dates For Their New Refi Option

The Federal Housing Finance Agency didn’t have a set date for its new refi option targeted to low-income borrowers when it announced the program last week. But on Wednesday, both Fannie Mae and