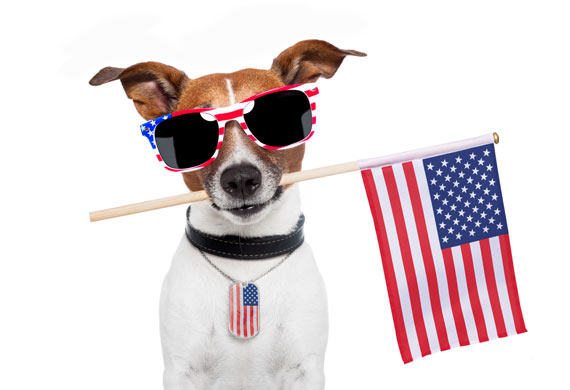 Dogs have such a negative reaction to some of the activities associated with the Fourth of July – fireworks, parades, parties, alcohol consumption – you’d think they’re unpatriotic.

Of course, it’s the commotion and unpredictable noises linked to Independence Day that disturb canines, who are best left behind instead of taken to large gatherings and should never get a chance to drink alcohol, which is toxic for them.

But the fireworks that traditionally greet our nation’s birthday represent the biggest concern for people seeking to keep their pets safe and calm, because they often evoke major anxiety among dogs.

Studies by the ASPCA show more dogs run away in July than in any other month, although it’s not entirely clear what role Independence Day celebrations play in those escapes. It may be that holiday parties provide easier breakout chances for dogs scared by fireworks, though the thunderstorms common to July may prompt them to bolt as well.

“When they have these noise phobias, it’s horrible,’’ said noted veterinarian Marty Becker, who founded an initiative called Fear Free that aims to prevent and alleviate anxiety in pets. “A lot of times these dogs will self-mutilate. I’ve had dogs come in that have run through a plate-glass window. They think they’re going to die, and when you think you’re going to die, you do crazy things.’’

Taking dogs for long walks before Fourth of July celebrations may help them better deal with the stress many experience from fireworks. (Photo: Getty images)

Not all dogs are susceptible to loud noises, and cats don’t get disturbed as much by them, typically opting to hide instead of running away when scared. However, some breeds, like border collies, Australian shepherds and smaller dogs like chihuahuas, can be very sensitive.

Becker and other experts on the field offered a number of tips that may help our four-legged friends stay happy through the Fourth:

Watch out for the signs

It’s not too hard to tell your dog is scared if you know what to look for. Shivering, shaking, panting, salivating, yawning and trying to hide are some of those indications. Frightened dogs may also lick their lips repeatedly or get stiff.

If they’re cowering in a corner or under a bed, don’t try to pull them out, which may prompt them to bite. Instead, either allow them to come out on their own or encourage them with a treat or toy.

The notion of getting dogs used to the bright flashes and loud pops of fireworks sounds good but takes a lot of time – think weeks or months, not days – and effort. Becker said in his 40 years of practice he’s never had a client accomplish it. Trained behaviorists have more success.

“They cannot anticipate so they see a flash and hear a bang,’’ said Marc Bercovitch, a veterinarian at the BluePearl Pet Hospital in Nashville, Tennessee. “This does not happen frequently enough for them to be naturally desensitized."

Music to their ears

Depending on the pitch, canines’ sense of hearing can be multiple times sharper than that of humans, so fireworks that may seem distant can still elicit stress. Music, preferably classic or reggae, can block out some of the offending sounds. A familiar surrounding would also provide a sense of comfort.

"Often they are startled by the noise and sound, so keeping them indoors, closing the blinds and having music or TV on to dampen the noise may help," Bercovitch said.

Books on tape are a worthwhile option as well.

Thundershirts and other methods

For dogs that are more prone to be affected by noises, Becker recommends products like Thundershirts – compression wraps that soothe by applying a gentle pressure – as well as appeasing pheromones like Adaptil and the milk protein Zylkene, which are available from vets and online.

On the medication front, Becker said he uses the gum gel Sileo on one of his dogs and “it’s about as sure-fire as I have seen as a veterinarian.’’

Silvani does warn that Thundershirts are not a perfect solution and dogs should still be supervised when wearing them.

She also says about the use of medication in consultation with a vet: “First and foremost, give a practice dose of the medication before the big night to see how your pet responds. Second, never share the medication with another pet or give more than the recommended amount. If you do, you may end up spending the holiday at your local veterinary emergency clinic.’’

Keep them at home

The old expression “everybody loves a parade’’ was meant to apply only to two-legged creatures. They’re not so great for dogs, who can get startled by the noises or trampled in the crowd of people towering over them. Whether attending a parade, party or some other type of holiday celebration, it’s best to leave pets behind in a secure place. If they’re outside, a leash is advised.

A tired dog is a happy dog, vets say. As a preemptive move before the fireworks start, it’s a good idea to get dogs plenty of exercise. A visit to their favorite off-leash park or a long walk may help them burn off excess energy and perhaps allow them to sleep through the noise.

Microchipping pets is the most effective way of tracking them if they get lost, but having an easy-to-read ID tag with the owner’s updated cellphone number is crucial as well. The sooner the pet can be located, the better the chance of a reunification with its owner.

Keep the punch bowl away

The ASPCA points out alcoholic drinks can poison pets, which may get weak and depressed or even go into a coma after ingesting alcohol. Make sure adult beverages are out of pets’ reach.