Living In The Pearl

Portlanders of a certain vintage have a strong memory associated with Portland’s Brewery Blocks. It used to exude the heady smell of of brewing beer, all wheat and warm. These days, the Brewery Blocks have been redeveloped into restaurants, retail, and a Whole Foods, but there’s no shortage of beer being made in this shiny new Pearl District. Now it’s craft beer, sometimes sold in limited batches. Between Broadway and 405, Burnside and the Willamette River, this section of downtown represents a gritter part of Portland that’s been developed into something more polished.

These days, “The Pearl District is on the map, not just nationally but also internationally,” says Todd Peres, of Debbie Thomas Real Estate.

Where 20 years ago there were warehouses and railroad yards, now there are restaurants and high-rise condos. Portland landmark Powell’s City of Books rises along the border, pulling in visitors and locals alike with the promise of a million books on one city block — not to mention frequent readings and literary events. Arts and culture have a history here alongside long-gone train tracks, with galleries dotting the neighborhood. The First Thursday art walk that’s been going since 1986. Every month, galleries open their doors. Artists, craftspeople, and musicians line the streets to show off their talents.

As Rose City Realty puts it, the Pearl comprises “an eclectic mix … old warehouses being converted to unique spaces. New buildings with imaginative features. Art galleries, First Thursday, fine dining, boutiques, coffee shops.” Recently, Rose City Realty had 20 listings for Pearl District property, ranging in price from a $220,000 studio to a $3 million penthouse. There might be some properties available at lower price points, but they can be hard to come by. Like any other neighborhood, competition in the market can be heady.

“Word is out that Portland is a fantastic place to live. There is fierce competition for property right now and there seems to be no shortage of qualified buyers. We continue to see demand outpace inventory by a long shot,” says Sasha Welford of Debbie Thomas Real Estate.

Downtown isn’t all high rises, though, and there are popular and diverse parks all packed into a small area of the Pearl. Jamison Square draws in children and families, especially in the summer, when the interactive tidal fountain starts to flow. Tanner Springs Park is a naturalistic park primed for picturesque photo shoots and contemplation (no dogs allowed please), while The Fields park allows those pups to roam free, along with any neighborhood kids, or any other locals looking to get a little fresh air. Portlanders are experts at taking full advantage of sunny hours and days, after all.

Some people are drawn to the Pearl and downtown because of how connected the area is for transit. Need to get to Intel in Hillsboro? Just hop on the MAX in the morning. Research at OHSU? The streetcar will deliver you to maybe the coolest commute in town, the Portland Aerial Tram.

The rent might be the highest of any other area in the city, currently averaging about $2,200, and you would be hard-pressed to find a studio for less than $1,300, but there’s a reason demand is high.

“I hear many people saying they are going to go from two cars to one, saving the car for those trips to the coast and Mount Hood and otherwise getting around by foot, bike or mass transit,” says Peres. “People want to be in the Pearl District because they want to live in a vibrant, urban neighborhood where they can walk to restaurants, coffee, shopping, shows, nightlife and other civic events.”

If you gave yourself the goal of trying one new IPA in the brew pubs in the Pearl every night, it could take you three weeks, depending on the seasonal brews on tap. Pearl IPA is always on tap at 10 Barrel Brewing’s Pub, with its brand-new rooftop bar.

Businesses know that locations in the Pearl are a draw to potential employees, too. Wacom, a technology company that develops digital pens, is moving their headquarters to the new Pearl West building at 14th and Irving, and Zoom+ is planning on moving to the same building from their current headquarters in Hillsboro.

“In general,” says Peres, ‘I’m finding that all of our buyers, not just those purchasing in the Pearl, want to be able to walk to something from their home. Not having to burn a gallon of gas to buy a gallon of milk is definitely a virtue shared by most buyers.” 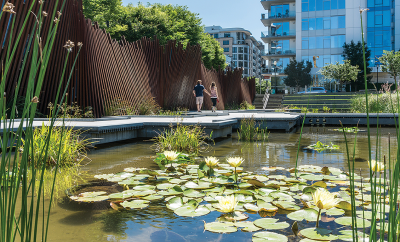