Oregon Outshines Most States At Reporting To Parents On School Performance 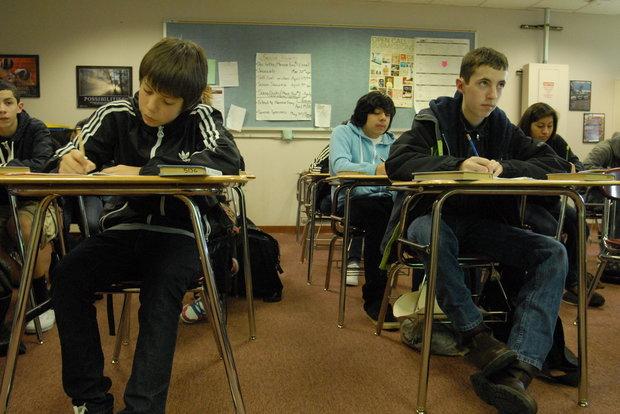 Oregon does a better job than most states of communicating clear and thorough information about public schools' performance to parents and the public, a new study finds.

Officials at the non-profit Data Quality Campaign, funded by more than a half-dozen of the nation's biggest education philanthropies, are big believers that sharing quality statistics about public schools can deliver a big payoff for students.

So their researchers set out to check how well each state communicates that data about schools' performance to ordinary members of the public, starting with a basic Google search for "(state name) state report card."

Oregon scored well, starting with the fact it takes just one click from those search results to arrive at a landing page linking to a report card on every Oregon school and school district.

Oregon also earned kudos for reporting on the most up-to-date test results, showing how much growth students achieve during the year, and breaking down graduation rates and other key statistics by students' race, gender, economic and disability status and whether English is their first language.

Oregon was not called out as a model state, however, in part because the report said it is missing a few important data points, including what share of each district's and high school's graduates go on to college.

Tricia Yates, communications director for the Oregon Department of Education, said credit for the strength of Oregon's school report cards stems from the department's decision to involve a large and diverse steering committee of parents, employers, teachers and others to help decide what the reports should contain and which features, wording and graphics were easiest to understand.

The steering committee's primary goal was to help the state create performance reports that would give parents the most interesting data in a format they could readily understand. 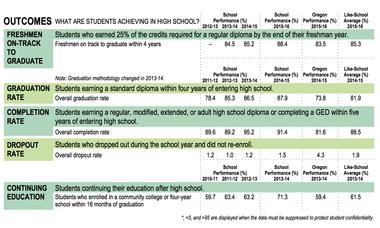 This excerpt of the report card on Portland's Franklin High School shows how well the school is performing, including its outstanding graduation rate. Oregon's school performance reports are generally more complete and user-friendly than those in other states, a new report finds.Betsy Hammond | The Oregonian/OregonLive

Yates said officials at the Data Quality Campaign seemed to have overlooked some information on Oregon's performance reports. For instance, the state does, in fact, report the percentage of students who enrolled in a two- or four-year college within 16 months of graduating from high school.

Another key piece of data the researchers wanted to find on school report cards -- three years of test scores for every grade and subject tested -- was turned down by Oregon's steering committee, Yates said.

Given limited space, the group favored giving three years of reading and math scores only for the whole school, she said. Grade-by-grade scores for schools are available elsewhere on the state website, she noted.

The report, "Show Me the Data," mostly gives a downbeat picture of states putting out report cards marred by "clunky formats, obscure terms and missing data that prevent people from understanding the full picture of education in their state."

"As a nation, we have not yet prioritized getting this information into the hands of people who need it," said Aimee Rogstad Guidera, president of the data organization.

Oregon outshone the pack, however. It is one of just seven states that put out school performance reports in at least one language other than English, for example. In Oregon's case, it provides school and district report cards in Spanish and English.

Oregon is also one of 21 states whose reports on school district performance count and identify schools in need of improvement, the report says. And it is among the 25 states that show how the distribution of qualified teachers varies between schools that serve a lot of low-income students and those who don't, it said.

Like most states, Oregon plans to retool its school performance reports by 2017 or 2018.

That is because the latest version of federal education law, the Every Student Succeeds Act, gives states more latitude to decide how to define and measure school success. Congress agreed with the many critics of the old No Child Left Behind Act that its definition of school success was too narrow and prescriptive.

The new law requires states to evaluate schools at least in part on their success getting English-language learners to master English. It also says they must add at least one other factor besides test scores and graduation rates. But it gives states leeway to decide which factors count the most and what lens is best used to judge test scores as exceptional, terrible or in between.

The Oregon Department of Education plans to decide by February how it plans to judge school performance under the new law, said Tim Boyd, Oregon's director of school and district improvement. Public reaction to a draft proposal will be sought in January and February before a likely state Board of Education vote in late February, Boyd said.

Will We Have A Buyers Housing Market In 2021

If you’re looking to buy a home, you’ll stand the best chance in a buyer’s housing market, where listings are flush, demand is low and buyers have the upper hand — not to mention most of the

What To Budget For Closing Costs When Buying A House

Are you considering purchasing a home for the first time? Then you’re probably already saving money for your down payment. But what about all the other costs needed to complete the transaction?

A super-easy plan for getting organized without adding to your home-is-school, home-is-work, home-is-everything time burden.Did you ever notice that your self-improvement pacts with yourself are

5 Tasks Every Homeowner Should Do In January

Start looking for that contractor NOW if you want your project done by summer’s end.Whew. The holidays are done. The new year has rung in.That's when smart homeowners know it's time to do these