The share of pricier homes available for sale at a discount from their original list price is growing, even as sellers of less-expensive homes seem somewhat less willing to consider a price cut.

In June, 14.2 percent of all U.S. homes listed for sale on Zillow had at least one price cut, up slightly from 13.4 percent in June 2017, but more or less within the roughly 12 to 14 percent range in which the data have hovered since mid-2013. Still, price cuts could be increasingly more common in coming months if more recent trends continue to hold. Since the beginning of the year, the share of listings nationwide with a price cut increased 1.2 percentage points, the greatest January-to-June increase ever reported, and more than double the January-to-June increase last year.

And as home value growth begins to show signs of slowing in a number of large markets, the local price cut phenomenon is more pronounced. In two-thirds of the nation’s 35 largest housing markets, the overall share of listings with at least one price cut has risen over the past year. 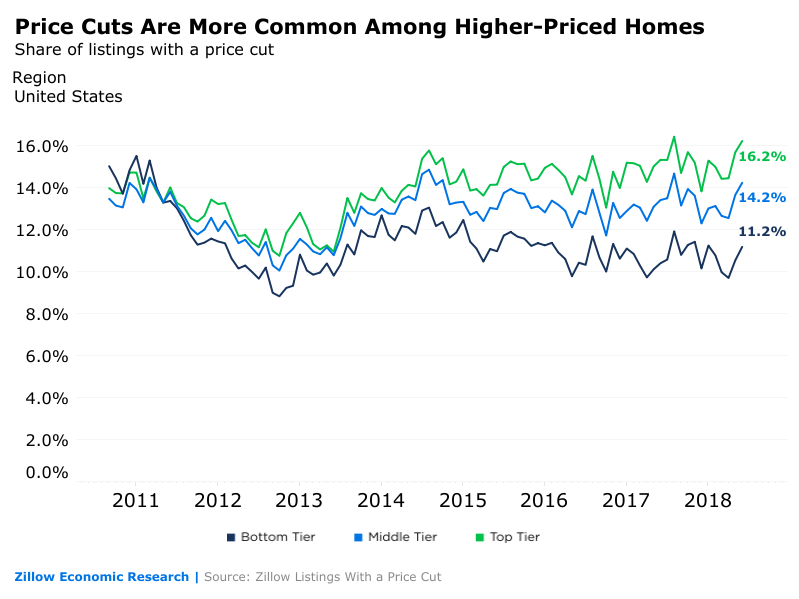 Zillow forecasts home value growth across the U.S. to slow to a 6.6 percent annual appreciation rate over the next year. Among the 35 largest metros, home value growth in San Jose, Calif., Indianapolis and Charlotte, N.C. are forecasted to slow the most.